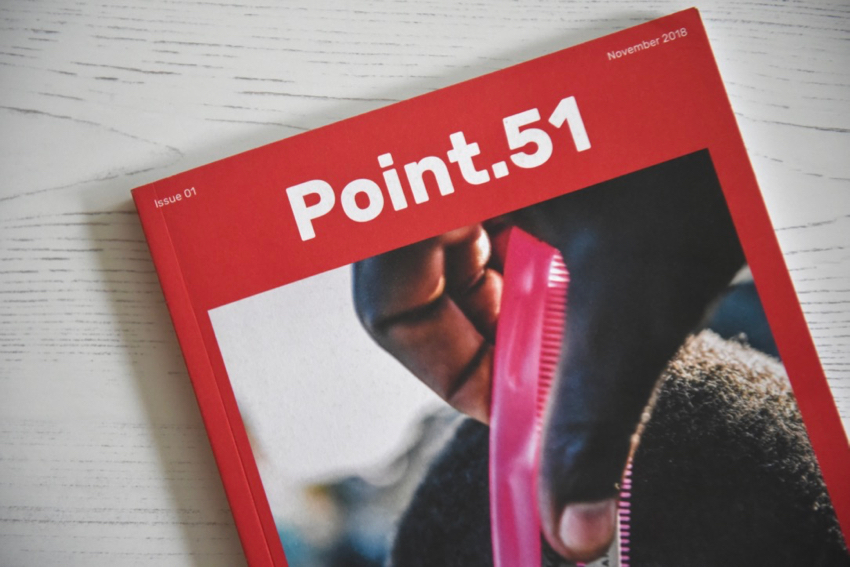 I wouldn’t have expected to use the word ‘uplifting’ to describe an independent print magazine about refugees’ journeys, but I felt surprisingly uplifted after reading the first issue of Point.51 magazine.

Following in the slow journalism tradition of Delayed Gratification, Point.51 fills in the story ‘after’ the news cycle headlines. Its long-form reportage and documentary photography explores essential contemporary issues in Europe – one at a time.

When we started Point.51, we did so with the belief that stories broken quickly are often, and perhaps unavoidably, stories only half-told.

The structure of Point.51’s first issue on the theme of Journey reflects asylum seekers’ journeys travelling through Europe. Stories of arriving in Europe at the beginning of the magazine, and experiences of settling in the UK at the end. So it makes sense that the central and longest story in the magazine is about Calais, the epicentre of migration to Europe.

Point.51 magazine describes the despair and frustration felt by both civilians and asylum seekers in Calais. The article seems to come to an end. But a few double-page spread photo pages later, it begins again by stating, ‘It is at this point that news reports about Calais usually end’. The article continues by giving a nuanced and detailed story of Calais’s history, a city shaped by migration.

The article ends with a much more upbeat ending quoting Calaisians in their mid-twenties, Pauline Simonneau and Remi Crombez. They want to change how their city is perceived through their ‘Use-it-Calais’ map, an alternative guide for young people visiting the city. They say, ‘”There are refugees in Calais, and there always will be as long as England is attractive to them … So let’s do something with it.”‘

Exposing the humanity and compassion of ordinary people is something that Point.51 magazine does extremely well. Whether that’s the man sheltering asylum seekers at his farm, the woman volunteering at a clothing distribution centre. Even the asylum seeker that’s found a home in Harrogate. It’s massively different to the despairing stories reported in the media. I was reminded, simply by reading their stories, that these are real people too with true and hopeful experiences.

Point.51 magazine veers away from marginalised debates about migration by reporting the experiences of the people they interview. Instead it reports on quirks of migration, such as Cubans living in Serbia due to visa free travel, a legacy of the Cold War.

Thank you to Point.51 magazine for the gifted copy of issue one, Journey. This has in no way influenced my review of the magazine.