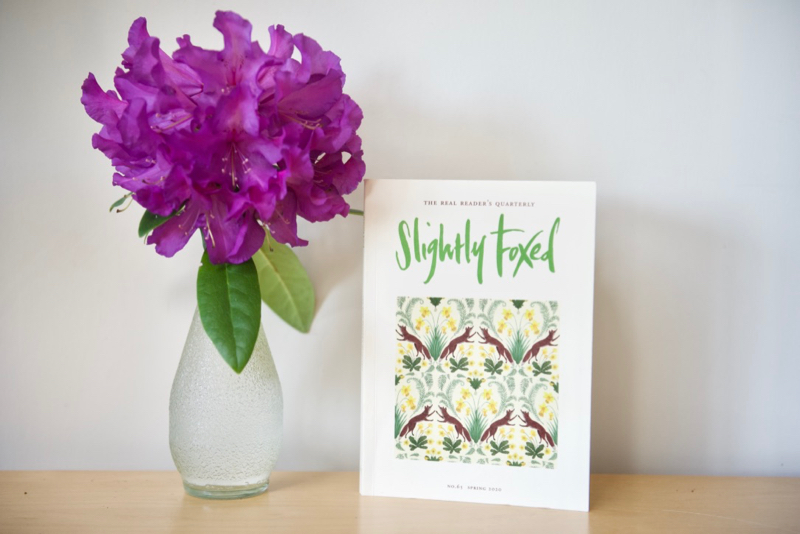 I like a book to sweep me away with a brilliant plot and believable characters – I was happy to leave literary criticism behind after university. Even so, when Slightly Foxed’s pretty cover caught my eye, I decided I could make an exception.

Slightly Foxed is an independent-minded literary magazine. Each quarterly issue features contributing writers’ personal essays on a book of their choice. None of the books in the essays are new, but they’ve all made an impression. As I continue to make my way through a stack of novels in lockdown, I hoped Slightly Foxed could help inspire me with what to read next.

Reading Slightly Foxed is like roaming through an esoteric second-hand bookshop with a well-read friend.

I bought a copy of issue 65, published in Spring 2020. The magazine doesn’t commission essays; every essay feels friendly, passionate, and informal. I had expected all the essays to be about novels and stories – there’s a fair few in the Spring 2020 issue: George Orwell’s Animal Farm; books by Evelyn Waugh; W. Somerset Maugham and others. But there were also essays on books about animal behaviour, manuscripts, and gardening. Reading Slightly Foxed is like roaming through an esoteric second-hand bookshop with a well-read friend.

It’s the personal essays that make Slightly Foxed’s suggestions of books so interesting. Dog’s Eye View by Rebecca Willis about Alexandra Horowitz’s, Inside of a Dog was warm and witty. Christopher Rush’s fascinating essay examines how Animal Farm parodies Russian communist leadership. And I loved the poignant personal essay from Mary Helen Spooner about the poems of Robert Service.

I may not have found the book I want to read next, but Slightly Foxed is far from pretentious literary criticism, more of a glimpse into someone else’s life with a book.

Slightly Foxed, also known as Foxed Quarterly has a book imprint and sells titles that are older or obscure. And between magazines, you can keep up with a monthly podcast. Something I’m catching up on during lockdown!