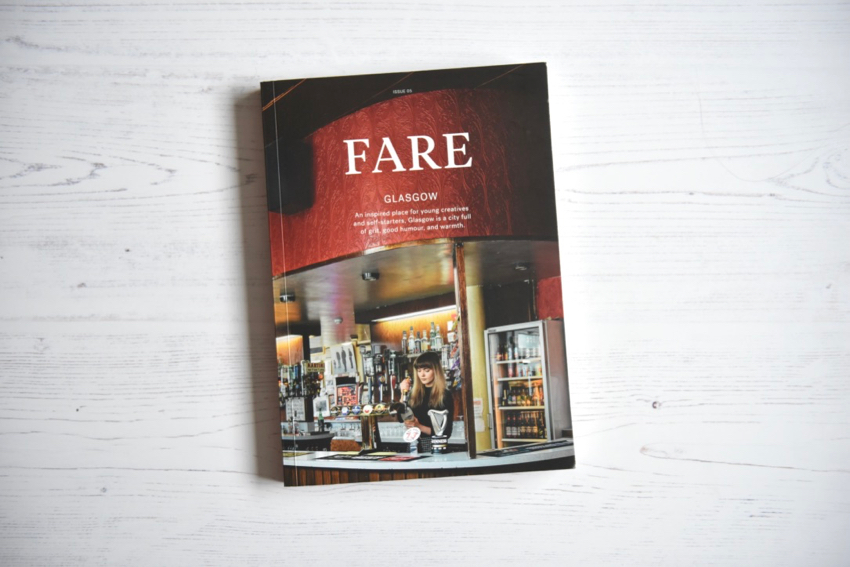 At this time of year, as we slip from summer to autumn, the gathering moody clouds remind me of the months I lived in Scotland under sodden skies. It’s tempting to travel north in a rush of nostalgia, but this time, Scotland travelled to me in the form of Fare magazine’s issue on the city of Glasgow.

Fare is a bi-annual independent magazine exploring city culture through the intersection of food, history, and community. Fare has already travelled around the globe to Istanbul, Helsinki, Charleston and Seoul. The fifth issue is more personal as it’s the home of editor Ben Mervis. He recalls how he ‘arrived in Glasgow a decade ago as a doleful American student but within a couple of weeks I was researching how I could stay here forever’. In the editor’s note he invites us into a personal tour of the city: ‘I’ve called Glasgow the first love of my life. Now let me show you why.’

Ben’s passion for food culture hugely influences Fare magazine and it’s unsurprising to learn that he has worked on the TV series Chef’s Table. He named his magazine ‘fare’ for the dictionary definition, ‘to go; travel’, ‘to eat and drink’, ‘to experience good or bad fortune; get on’. Weaving food, culture and society together, along with his background in medieval history, Ben describes food culture as ‘tradition, memory, skill, and centuries of technique’.

Hearing about the city from its biggest fans gives Fare a depth that not many other travel magazines achieve.

Getting to know a city through our taste-buds is, after all, one of the best ways to explore. A social activism strand to Glasgow’s identity means that Fare celebrates social enterprises such as Civic House Kitchen and The Movable Kitchen Garden, along with a celebration of provenance at The Gannet restaurant, and foraging along the banks of the River Kelvin.

A city of ‘grit, good humour and warmth’, Fare recognises that Glasgow is nothing without the locals. Glaswegian writers, photographers and illustrators are featured in abundance throughout the magazine to give a sense of the city’s aesthetic as well as local knowledge. Hearing about the city from its biggest fans gives Fare a depth that not many other travel magazines achieve.

I loved reading about Grant Hutchison’s experiences of going to gigs at Glasgow’s Barrowlands Ballroom followed by performing there as a member of Scottish indie rock band Frightened Rabbit. The accompanying illustrations drawn by his brother and band-mate, the late and much missed Scott Hutchison, are a touching tribute to someone who made a lasting impression on the people of Glasgow.

Fare reaches back into history for the roots of a city and searches for shoots still flourishing in today’s culture. Glasgow has a spirit of activism and free-thinking humour. Fare relates how, in 1986, Glasgow renamed its St George’s Place to Nelson Mandela Place where the South African Consulate was based. At the height of the apartheid regime, the consulate was forced to change its letterheads to the name of their most famous political prisoner, a small but defiant action from the anti-apartheid movement of which Glasgow was part of.

I didn’t know this story until I read Fare, but I recognised the city that I had called home. And that’s the central message I took from Fare magazine: no matter how our cultures evolve, how globalised and hegemonic we may become, cities undeniably retain their histories and personalities in their food, culture and people generation after generation.