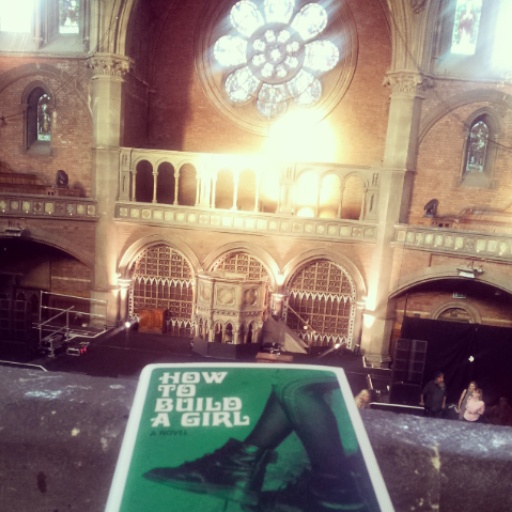 After Caitlin Moran’s notorious first book How To Be a Woman went down so well as a Christmas gift, my boyfriend gave me her second book Moronthology (equally hilarious) and tickets for us to see her speak about her third book How to Build a Girl at Union Chapel for birthday gifts. What he didn’t realise when he booked the tickets was that he’d end up standing on his seat chanting ‘I’m a feminist!’, which gives you a pretty good idea of how the evening went.

I steered clear of How To Be a Woman initially, viewing it as long angry autobiographical rant about feminism and periods. So it was a nice surprise, after having it forced on me pityingly for my lack of pop culture knowledge, to find out that it was actually a hilarious commentary on girl-and-womanhood by a witty, astute writer, who just happened to have a berserk badger stripe hairstyle.

Standing in the queue outside it became apparent that Caitlin Moran’s work has so far spawned a predominantly female fanbase; my boyfriend was one of about thirty men there. Thirty men who also worry about their legs and fancy Benedict Cumberbatch. We’re all essentially the same.

How to Build a Girl’s protagonist, Johanna Morrigan, feels very like a fictional reflection of Caitlin: an overweight teenage girl from Wolverhampton living on benefits and leaving school to write for a London based music magazine. She states, ‘this is a novel and it is all fictional’, leaving the events of the book open ended as to whether they happened or not, and a frequent need to remind myself that I wasn’t reading How To Be a Woman Part Two.

Not since I read Jaqueline Wilson and Judy Blume’s books growing up have I read a novel that feels like an author knows, and is willing to write about, what growing up as a teenage girl feels like. How to Build a Girl is infused with positivity, the limitless, indestructible, lightness of being a teenager as well as the sometimes confusing, dark, destructive struggle of growing up and building of an identity. Set against a backdrop of ‘90’s working-class poverty, I felt I had a window into a community I’ve co-existed with and rarely heard from before, just as pertinent twenty years later as Cameron’s slashing welfare benefits and the propaganda of a ‘lazy’ working-class is still firmly etched into the collective middle-class subconscious.

Many of the ‘90’s references were lost on me (I knew Ceefax, but not Uncle Tupelo) but Caitlin’s writing was so slick, witty and vivid that glossing over some of them didn’t make me enjoy the book any less. Her ability to metaphorically pin-point exactly how something feels, sounds or looks is exceptionally displayed; a ‘very large penis’ is a ‘draught excluder, with two buttons for eyes’; the extinct trolleybus system ‘a series of dreamlike veins left on old maps’.

As far as I can tell from Caitlin’s twitter feed every audience has been invited to stand on their chairs and shout ‘I’m a feminist’, so if you’ve got tickets for the tour you might want to get practising. And, if you’re thinking of buying the book, it’s far too good to wait for the paperback at Christmas, go and buy it now!

How to Build a Girl is on sale now, and Caitlin Moran is touring throughout July.